Born in Brno, Tomáš Končinský is a graduate in Screenwriting and Dramaturgy from the Academy of Performing Arts in Prague (FAMU). He works as a screenwriter and script editor for TV, principally the channel ČT:D. In 2015, he was shortlisted for a Český lev award for the screenplay of the film Schmitke. His is one of the brains behind Kustodka Květa [Květa the Custodian], whose incredible non-adventures from her gallery chair won the Muriel prize for the best comic strip of 2014. Tomáš likes to connect the worlds of children and adults, as he perceives these to be one and the same. As one of the team of authors of the book Překlep a Škraloup [Typo and Skim], he won a Magnesia Litera and Zlatá stuha prize in 2017. 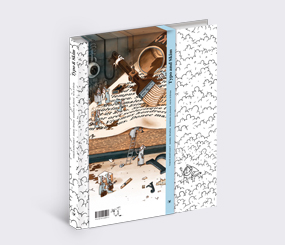